This post is for anyone with lots of apps on their iPhone, iPad, or iPod Touch. who is having a hard time keeping track of them... 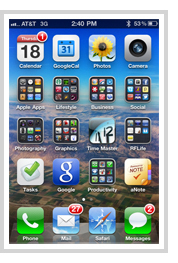 Background
Recently a friend of mine mentioned how he hates Apple's IOS navigation model of flipping through page after page of icons. I replied that I didn't have any trouble finding apps on my IOS devices. I have most of my apps organized into folders and everything is on one of two two pages. So, my friend, decided to put me to the test. "Do you have a webpage screen grabbing app on your iPad?", he asked. "I don't recall," I replied, "Let's see..." One swipe, one click, and three seconds later, "Yes: Webshot. It's in my utilities folder."

"Wow! That's impressive", says my friend. He then went on to share that the real problem, was getting his head around the task of organizing hundreds of apps into folders. It just seemed like an endless time sink...

Sound familiar? Well I have a strategy for performing this task that makes it easy to organize your IOS screen life. Get Organized!
Step by Step Folder Management 1) On your iPhone or iPad, navigate to your last page of icons. Click and hold on any icon, to enter edit mode (wiggling icons).

2) Drag all your apps off the lower tool bar and onto the last page, including the apple apps. If your last page is full, go to the next page.

3) With and empty tool bar navigate back to the first page (Home) -- pressing the round physical button will take you there directly.

4) Now reviewing the icons on your home page, drag any two similar icons onto each other; this will create a folder. For example: if your home page included Facebook, a Twitter client and the LinkedIn app, you could drag the Twitter app onto the Facebook app, which will create a folder called "Social". You can rename it if you like. Then drag the LinkedIn app onto the Social folder. This will result in three icons inthe single folder named, "Social". Repeat this process, creating folders for any other like categories, on the page.

5) Drag the folders you created from your home screen onto the empty tool bar. The iPhone will accommodate four; the iPad, six.

6) Now, with folders in tow, navigate to all the other pages (screens) of application icons, dragging appropriate apps into the folders on the toolbar.

7) When you get to the last page, and you have grabbed all the apps that fit the folders on your tool bar, drag these folders off the toolbar, and repeat the process.

This is a really easy way to organize your apps. The big idea here, is bringing the folders to the apps, instead of trying to drag the apps from screen to screen in search of folders -- you'll likely go mad, doing that!

Once you have everything organized by folder, you can use the toolbar to relocate your folders to whatever screen you desire. Most people prefer certain, "heavy use apps", to be free standing. My home page is a mixture of both icons and folders, and as I have already shared, all my apps fit on two screens!

IOS Folder Capacity
On the iPhone, you are allowed a maximum of eight screens; each screen can accommodate 16 folders or icons, plus the ubiquitous toolbar which can hold a combination of four icons or folders.Each folder can house a maximum of 12 apps. If every slot is dedicated to a folder, that means the iPhone has a maximum capacity of 1584 apps, or until you run out of memory.

On the iPad, you are allowed a maximum of 11 screens; each screen can accommodate 20 folders or icons, plus the toolbar which can hold a combination of six additiional icons or folders. Each folder can house a maximum of 20 apps. If every slot is dedicated to a folder, that means the iPad has a  maximum capacity of 4520 apps, or until you run out of memory.

Folder Names
Obviously, you can name your folders any way you chose, but here is a list of potential folder names that may be useful:

One last tip, to find an app gone AWOL...
Navigate to the the home screen and enter the find mode, by either swiping to the right or by pressing the round physical button at the bottom of your screen. Once on the find screen, type in the name of the app you are looking for. It won't take you to the app, but it will confirm it's presence and you can launch it, which is probably why you were looking for it in the first place. :-)

Now go forth and organize!

Steve Lomas is an interactive media veteran, designer, entrepreneur and idea mechanic. He is the founder of MojoMediaPros, and CyberIsland Studios. 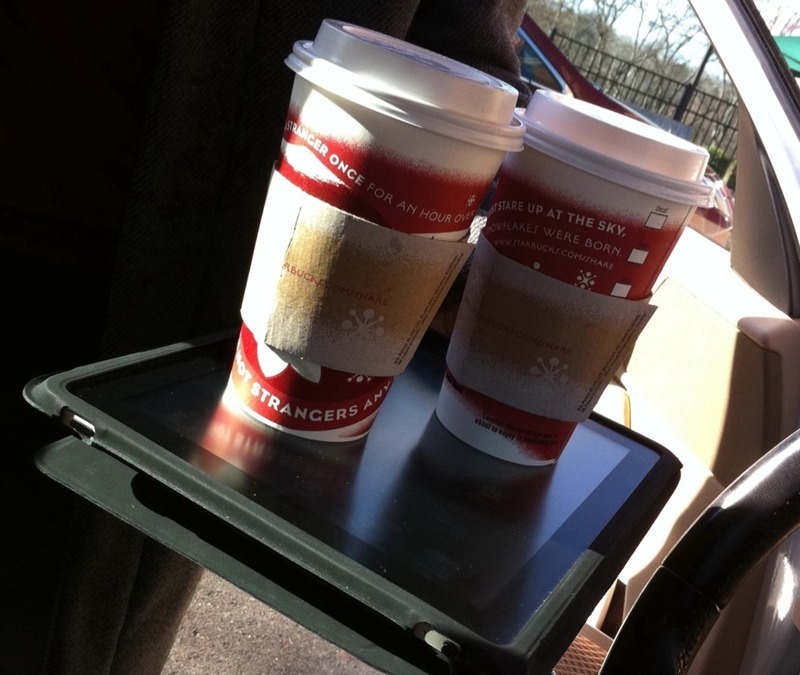 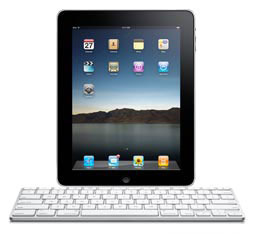 As cool as it is, I couldn't justify an iPad, if it were only an entertainment device or media player. No, it has to hold its own as a productivity tool, in order to win my vote. I say that, but come to think of it, I did actually buy my first iPad (that's right, my "first" -- read on), sight unseen, hoping I could whip it into a useful productivity tool. I'm not looking for a a laptop replacement; just a good web and email machine with light duty authoring and editing capabilities.

I recently took my iPad to the CMS Expo in Chicago, and it was delightful to be able to leave my laptop and laptop bag back in the hotel room.

So, with this goal in mind, my friends and I have probably spent way more money than any of us care to admit, purchasing, testing and replacing one app for another, trying to determine which apps rule; a Darwinian competition of sorts: Survival of the Fittest iPad Apps.

As you may may or may not know, there is no file system on the iPad. So, the issue becomes how you get files onto the iPad, how to edit or author files on the iPad and then how to get them off the iPad to share them with the rest of the world. Support for cloud services, such as mobileMe, Dropbox and Google Apps, is key! Currently, most apps that can edit content don't support these and other cloud services, well or at all. And the apps that do, either can't edit or don't support your file formats, or if they do, they simply are not terribly robust. This will, of course, improve over time; but today, it's a reality.

One key app is GoodReader. This app seems to have the most robust email and cloud support and they provide their own pseudo file system. GoodReader recently opened their API to any app developer that wants to support it, so this could become a defacto standard -- why in the world didn't Apple make file sharing easier?

Another brilliant service is Dropbox. This app allows you to share a single desktop folder and it's contents with multiple PC's your iPhone and iPad. It works really well.

The combination of GoodReader and Dropbox is very powerful.

For you Microsoft office users, DocsToGo, can author and edit MS Word, Excel and PowerPoint docs, and they have just added support for cloud services.

Now, before you start thinking, "Great I will use my iPad to author and present projected PowerPoint presentations", you need to know that while Apple does offer a handy VGA adapter to connect your iPad to an external monitor or projector, only a select few apps are actually supported! I'm pretty sure the programmers at Apple had to go out of their way to create this unwelcome feature!

From my experience, Keynote and the built-in iPad Photo app are the only two apps that you can project. Oddly enough, Safari isn't even supported for VGA output. So, that means you cannot include any web content, (or for that matter, any Google apps content) projected from an iPad.

Keynote has its own shared desktop folder interface, for pushing files to the iPad, but keeping files synced, will likely pose challenges for some.

Another thing, that blows my mind is that you cannot organize photos, once they are on the iPad. You have to dock with your PC and re-sync.

I just bought the camera interface for the iPad ($29.00). It includes a USB dongle and SD card reader dongle. I'm hoping this hardware will mysteriously unlock some phantom functionality for organizing photo albums on the iPad. Probably not, but I can dream, right?

Other Accessories I Recommend:

Speaking of power adapters, you may already know that you cannot charge an iPad from a computer USB port or from an iPhone power adapter.

Griffen has some of the best iPad accessories. I like their leather PadFolio ($49.95); much better IMHO than Apple's flocked cardboard version. I use this in combination with the Belkin clear rubberized plastic clam-shell back cover ($49.99).

When I'm at home I take off the leather PadFolio<, and just go with the clamshell, which gives the iPad a great "no-slip" feel, as you carry it around the house.

Griffen also offers an anti-glare screen film, ($29.99) which greatly reduces fingerprints. The combination of the Belkin shell and the Griffen screen film completely encloses and protects the iPad from scratches and dust; important for resale value.

The Griffen industrial aluminum desk stand for iPad ($49.99) is another great accessory; ultra rugged and versatile.

One interesting point about any of the 3rd party protective covers, it that they are generally not compatible with the generic Apple accessories; i.e. any of the docking solutions. All you iPhone users, are already familiar with this issue. Personally, I don't recommend the Apple dock. It's not a great stand, and as I just stated, you can only dock a naked iPad. Some folks may not care about this, but something to be aware of, before you shell out the cash for these peripherals.

Another thing, I learned, is that most ear bud/headphone mini-adapters are not long enough to extend through a clamshell enclosure and still make proper contact in the headphone receptacle. The solution I found is an adapter made by Monster Labs, which I had previously purchased for my original iPhone, which had a similar problem.

I'll stop here, for now.Look for more about my favorite iPad apps in a future blog.

Regarding that second iPad, I mentioned... I've come to the conclusion that for the iPad to be truly useful, it has to be reliable, and given the importance of cloud services, described above, that means reliable access to the Internet. So, I ordered my second iPad with 3GS and additional memory.

Turns out, this also solved a couple of other problems: I no longer have to wrestle my iPad away from my business major, college-graduating son... I gave him my original iPad as a college graduation gift ;-)

Please let me know if any of this was interesting or helpful. SL