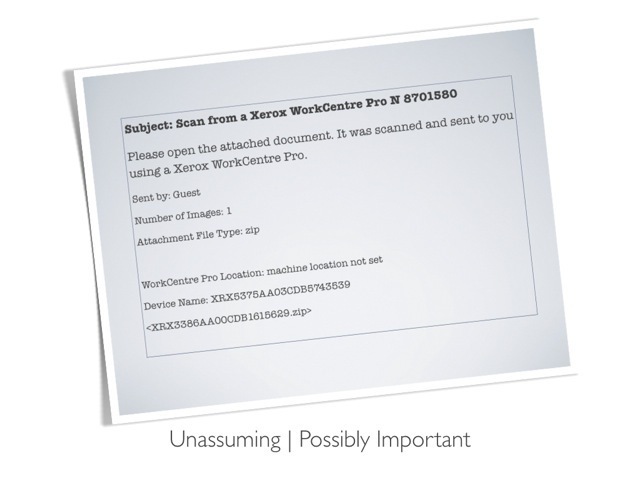 E-mail Exploitation on the Rise


Maybe it's just me, or perhaps my personal collection of email in-boxes, but  I've been noticing a marked increase in fraudulent email campaigns crossing my threshold. Really creative campaigns, designed by professional con arrtists hoping to coax me into opening their malicious e-mail attachments.

Creative or not, don't under estimate the threat. Malware can take many forms. Some is designed to mess with your system; some is designed to rob you of CPU cycles;  but the most sinister lurks in the background scanning and exporting your personal information, to who knows who.

Who Are These Guys?

These outlaws (and that's exactly what they are), are so industrious and seemingly good at what they do, it makes me wonder, why they don't have real jobs? Maybe they do... Or did? Maybe they're former Marketing and Advertising folks. Certainly, thousands have been laid off since the down-turn in 2008, so it's a plausible theory, but not one that captures the imagination... No, if I'm going out on a limb, I've got to do better than that!
Then it occurred to me... Postal workers! And not just postal workers... POSTAL CARRIERS!

Think about it. What better career to observe, learn and master the best marketing ploys, than delivering junk mail? AND who better than mail carriers, to track the effectiveness these campaigns? After all, they deliver a lot of the purchases that result from the most successful campaigns. And don't think for a moment, they aren't paying attention to what the FedEx and UPS drviers are delivering, as well. Heck, they're probably all in cahoots!


Of course, that's it! That's why they're  willing to walk our neighborhoods in shorts, posing as Federal employees:  working these campaigns MUST BE PROFITABLE!
And given the increasing number of these email deceptions, I'm of the opinion that their industry is BOOMING!!  I think there is even evidence that certain entrepreneurs are selling franchises, because I often get the same message from a dozen different email addresses on the same day!

I'm thankful for this redundancy, because it makes it easier to spot the hoax.


As with all booming industries, I imagine it won't be long before they form a trade association (E-Ployers Union?), followed by trade shows (DECEPTICON 2010?) and industry awards (The Mallies?) That's the REAL opportunity! If you really want to make money in an industry, scramble to create a conference and give away some acrylic chotchkies!


So the point of all this is to heighten awareness to the endless stream of email threats, and to perhaps train your eyes and mind to recognize these ploys quickly, so you don't inadvertently invite the bads guys onto your computer. Remember, when it comes to attachments, "If in doubt, don't open it!"  And, just because it looks like it came from a friend, doesn't necessarily mean that it did. If you are suspect, write them, in a separate email, and ask. Better safe than sorry.

There is no shortage of bad guys are out there. They are hard working, relentless and they are counting on us to drop our guard.Don't make their day!

Sent from my iPad